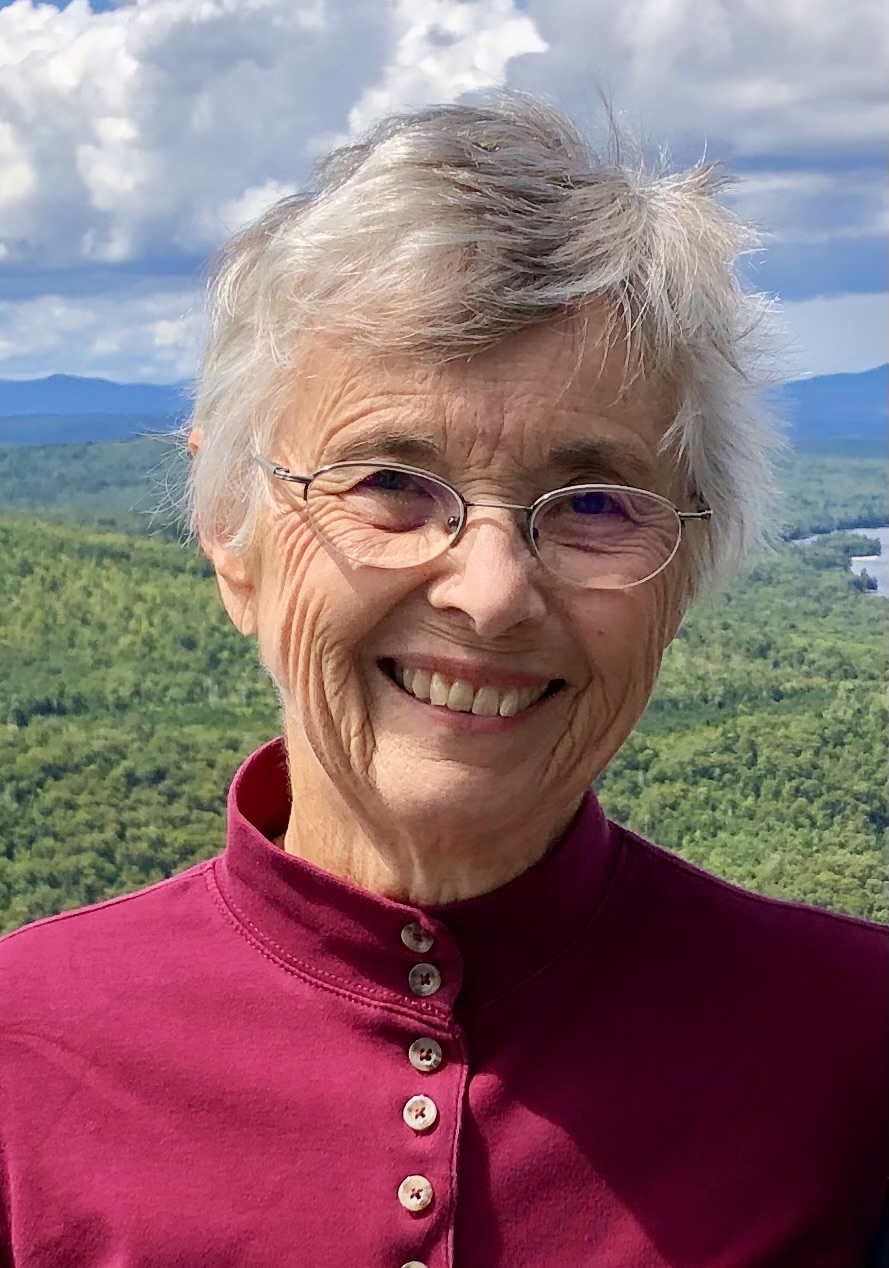 Sally (Page) Carville, of Gulfport, FL, passed away peacefully in her home on the evening of December 11th.

Sally was born to Norman and Elizabeth Page in Dover-Foxcroft, Maine in 1942. She was the younger sister of Pat and older sister to Roger. She grew up in Guilford, Maine where she played saxophone in the band and excelled in academics. She graduated from Piscataquis Community High School and went on to receive her B.A. from Colby College, majoring in mathematics. Later she would receive her M.B.A. from the University of Maine. She married Al Carville soon after graduation and they raised two children, Stephanie and Gregg. While living in Hawaii, she started a career in information technology which led to many unique opportunities in this field. Some of her positions included working at Guy Gannett Publishing in Portland, ME, becoming a Peace Corps volunteer in eSwatini and later in Guyana, as well as jobs with Bankers Insurance, Webster College, and the American Heart Association in St. Petersburg, FL. After retiring, Sally became a much-appreciated volunteer for Suncoast Hospice which she found rewarding. She was a member of the Unitarian Universalist Church of St. Petersburg, serving many roles from bell ringer to president. Perhaps the best thing to come of her involvement in the church was meeting Stu Farnum, who quickly became the love of her life. This late in life relationship completed her and the five years they spent together were incredibly special and not nearly enough.

Sally had many passions outside of mathematics and technology. While living in Maine she enjoyed cross country skiing and sailing. With more time on her hands in Florida (and less snow) she was an avid puzzler, and could often be found surrounded by crosswords cut out of newspapers or comparing her Spelling Bee results with those of her son. She enjoyed knitting and sewing and her children and grandchildren were always thrilled to receive her creations, knowing she had made them with love and care. Stuffed animals, Halloween costumes, blankets and sweaters, she was always eager for a new challenge! She loved bird watching and going for long walks around her St. Petersburg neighborhood, and more recently around her home in Gulfport. While she loved quiet moments reading and listening to classical music, she also loved spending time with her friends and family. She loved to travel and some of her favorite trips were backpacking through eastern Africa, visiting her daughter in Italy, and exploring the western canyonlands with her longtime best friend from college. For many summers she drove from Florida to Maine to spend time with her loved ones and provide them with excuses to go out for ice cream and lobster rolls. Despite the family and food, she always returned to Florida to her treasured group of friends who brought her such joy and comfort in her later years. Swimming, walking, concerts, knitting, art walks, and dinners were some of the many activities these women happily shared.

Sally is preceded in death by her parents and her partner Stu Farnum. She is survived by her daughter Stephanie and husband Ed Santella, son Gregg and wife Emily Carville, and four treasured “grands”, as well as her sister and brother and extended family.

Sally did not want a service. Instead, we suggest keeping her in your thoughts on a walk through a special place, while enjoying a sunrise or sunset, or maybe look to her for help on the Sunday crossword puzzle. If you happen to find yourself appreciating an especially chocolatey flavor of ice cream, know that flavor is exactly the one she would have chosen as well and raise your cone in a little toast to Sally.

Donations in Sally’s memory can be made to Unitarian Universalist Church of St. Petersburg. 100 Mirror Lake Drive, St. Petersburg, FL 33701

Dear Stephanie,
I was sorry to read of the death of your mother. She led an extraordinary life. I always enjoyed your Facebook postings about the vacations you all spent together and seeing how your family is doing.
Fondly,
Bruce

I am so sorry. My thoughts and prayers are with Sally’s family. She will be remembered for her commitment to peace and justice.

Sending heart felt condolences to Sally’s family. She was always ready to jump in and lend a hand. I will miss her.

Sally so wise and beautiful. She made a lasting impression on all who knew her. She faced her last health challenge with courage and made decisions which created a joyful new living experience and led to many new friends having the gift of knowing her.

Sally has been a dear friend ever since she came to Florida. She will leave a big hole in my life.
I will miss her so much.

I’m saddened that Sally has left us. She was a dear sweet person of solid integrity in a time so needed. From her Peace Corps service to her leadership in various roles at UUSP, she was golden and she was a mensch.

Dear Stephanie, your mother sounds like an AMAZING woman and she touched so many lives. I know you will keep wonderful memories alive within you.

Sally was such a lovely person. I really appreciated the way she did not mince words; she was always direct and truthful. One of the first people I got to know at UU St. Pete was Sally. She shared many of her experiences in congregational leadership that I grew to rely on. She and I knew that an ice cream cone could solve most of life’s problems. I will miss her very essence, her wisdom and cheery can-do attitude. My sincere condolences to her family.

I only got to spend a little Time with her but she impressed me as an extraordinary and wonderful woman. I wish have known her better.
Every comment she made delighted me.
So sorry for the loss of her for her family bc and adoring friends.

Sally was always a great help to me when I assumed a couple financial roles at UUSP which she had handled before me. I admired Sally’s knowledge of the history and culture, balanced suggestions when asked and her dry humor.

Sally was one of the primary reasons I joined the bell choir at UUSP. I appreciated her encouragement, and her dry sense of humor contributed to the laughter and joy we all experienced at bell choir rehearsals. She will be missed!

Dear Stephanie,
I knew your mother during my many years at UU St. Pete, both before and after her last posting with the Peace Corps. She was such a joy, always kind and gracious. The world has lost a bright light.

Sally spread warmth and wisdom everywhere she went. She was an inspiration to me and I will miss her wise counsel.

I met Sally in a formative time in my life as a Peace Corps volunteer. She became a role model in how to live compassionately and authentically. While I had not seen her in some years, she tangibly altered my life and I was so grateful for her friendship.

Sally was a wonderful friend to this snowbird…walking and knitting with her was always a good day.

I worked with Sally at the American Heart Association. She was so loved. I so enjoyed her stories. A beautiful kind woman with an enormous heart. I am so sorry for your loss.

Sending condolences and prayers to you all during this time. Sally lived a fascinating and full life!! And she raised amazing children….

Sally was a good friend since high school. She lived across the street from the girl who would become my wife, Judy Bates Haynes. We were in the high school band together, and i helped her learn to play the pipe organ. She lived a very interesting life focused on helping others. I will miss visiting her on my annual March “Florida Tour”, and offer heartfelt condolences to her family.

We will miss Sally and I will absolutely find her everywhere here in Maine on walks, and in I will look for her in my travels too. It was so good to learn more about her (sax player!) here, and we were lucky to know her. Huge love to Steph and Gregg and your families and Sally’s wonderful friends.

Condolences, comfort and love to all who loved Sally. Carry forth her spirit with the good things she enjoyed and did for others.

I did not know Sally as well as most knew her at UUSP but I admired her service to our congregation and her service in the Peace Corps . My condolences to her family to whom I heard her refer many times.

It was always a pleasure to see Sally and her smile at UUSP. Her commitment to the church was evident in every thing she did. I look forward to tipping my ice cream cone in her direction.

I’m so thankful for the times & had the great pleasure of speaking to Sally. Such a kind, warm hearted person. I remember she would always make me monkey bread for my birthday at the American Heart Association. I will miss her. I have great faith that someday we will see her beautiful soul again.

I and Sally met in her first day at our church. Since then we became friends and went to concerts and operas together, many times for dinner; we both loved Thai food. We were very different but compatible. I met Stu soon and shared their romance.
I also was following her medical condition and was amazed how strong she was.
I send my condolences to Stephanie and Gregg. I was in touch with Stephanie, since Sally was not able to receive visitors.
I will miss her as many of other church members will.
Sula Donnolo

For Sally’’s Family. Sally and I were High School class mates. Sally has, and always will occupy a special place in my heart. Sincerely, John Graf , class of 1960

In my near 10-year membership of UUSP, Sally was one of the people I most admired. She was always considerate, kind, pragmatic, honest, humble, observant and giving. I respect her for her service in the Peace Corps as well as in the church —for a life well lived. Her light continues to shine.