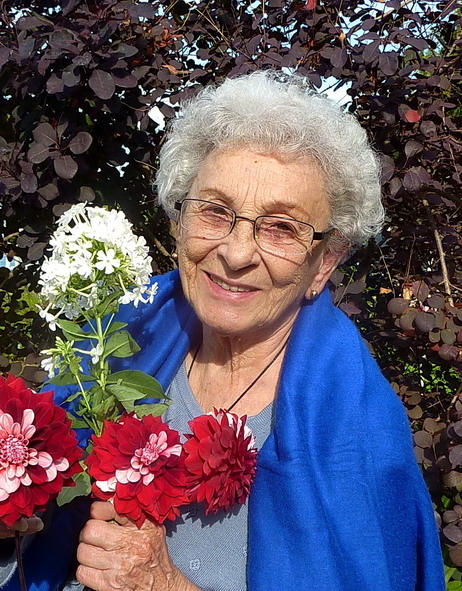 Mary Mattingly, 94 (Mary Parks, Mary Jones, from prior marriages), died peacefully on October 25, 2022 at Suncoast Hospice in Pinellas Park, FL. She was born to Peter and Carmella Savoca both Italian immgrants from Sicily. She had 7 siblings: Thomas, Julia, Sandy, Angie, Pauline, Toni, and Patricia.
Growing up during the depression in upstate NY gave Mary a strong sense of community and family. Her childhood taught her to value “Food on the Table” which meant eating what the family could grow in their garden or preserve and can for the severe winter months ahead. In her later years, Mary always made enough home-cooked food to feed anyone who came through her door!
At 21 years old, Mary married Ned Jones and moved to the West Coast. They travelled extensively as her husband was a lumberjack. Mom was often in remote logging camps in those early years.
Around 1960, they eventually moved north to the last Frontier: Alaska! Lumber and fishing jobs attracted the young and adventurous. In 1976, Mary and her second husband Al moved from Anchorage to Pinellas Park, Florida where she spent the remainder of her days…46 years to be exact.
Mary learned to be adaptable. Most of her jobs involved food preparation…from waitressing (in her early years) as they travelled up and down the West Coast to working in a fish cannery for a brief stint, while her husband was out on fishing boats in Alaska. The last decade in Anchorage, Mary worked in the flight kitchen preparing food for long-haul airlines that stopped in Anchorage to refuel. Later in Florida, she was a supervisor for a Honeywell cafeteria until she retired.
Mary’s focus throughout her life can be summed up in four words: Family, Friends, Food, and Flowers. During the covid pandemic years, Mary could be seen cooking up a storm for all her appreciative neighbors. She proudly lived independently (feeding her neighbors) in her own apartment until this past summer. Mary was the “mother of many” and was always caring for others.
She attended Sacred Heart parish where she was an integral part of New Life Ministries and met her third husband there, Joseph Mattingly. Later they shifted over to St Matthew’s Catholic Church. Mary was a Columbiette. She was also a member of the AmVets and the American Legion.
Mary Mattingly is survived by her 2 siblings: Toni and Pat. She has 2 daughters: Julane and Lynn; 3 grandchildren: Al, Justin, and Ciara; and 3 great grandchildren: Neyo, YaYa, and Joel. Plus, all the Mattingly family that embraced her in her later years with her husband Joseph (Jerry) Mattingly. Mary died the day before their 21st anniversary. She missed him dearly after he passed away in Feb 2021, and finally flew to his arms to dance in heaven on their anniversary.

I will always remember Mary’s beautiful energy towards me, her welcoming heart that made me feel close, accepted and loved. She was a unique soul and I’m sorry she is no longer with us.

Mary is remembered as the greatest Love of my Father Jerry Mattingly! I admired her fortitude, caring, creativity, and joy of life. I also loved her wonderful cuisine and endless demands that I take some home! Warmest wishes for strength and comfort to her Family.

Dearest Julane,
Deep condolences. Although we never met in person, I got a good sense of Mary from your stories and photos. A lovely being who raised an equally radiant daughter. Sending you ❤️

Dear Julane,
Deep condolences. I got the message yesterday when I met Roland. I am glad you were able to stay with Mary.
Sending you ❤️ hug Maya

Dear Julane, Lynn & Family, I am praying for all of you and sending love, as you both grieve and celebrate Mary. Dad loved her so very much. ❤️❤️❤️

Mary had a big heart and a bright spirit, and made everyone happier for knowing her. She was a dynamo, with never-ending energy and love to share with those she knew. She always welcomed us and shared her wishes for our happiness whenever we were able to visit. We will miss seeing her smile. She will be missed and our love for her will continue.

Mary was a beautiful person inside and out! She really cared about people.
My condolence to all that loved her as she will be really missed!