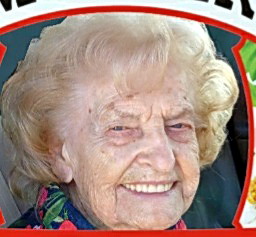 Our beloved Edna E. “Esther” Howes passed away peacefully on December 27, 2022, in Palm Harbor, Florida at the age of 101. Esther was born to Rev. Guerdon E. and Minnie A. (Wagner) Lowman on September 20, 1921, in Linthicum, Maryland. Esther was blessed with five brothers and sisters in a home filled with faith in God and love for one another.

She was able to skip the 9th grade and graduated high school at 16 years old. Followed by a year of studies to earn a Commercial Stenographer Diploma. Upon graduation, she became Secretary and ultimately, Office Manager for her father’s church, the Baltimore Gospel Tabernacle, and international broadcast ministry. Esther and sisters, Ruth and Doris, performed as the Lowman Sisters Trio featured at the beginning and end of each broadcast. The Tabernacle is where she met and later married the love of her life, James H. Howes and they lovingly raised their sons Jim and Dan. They were married for over 56 years until his passing in 1996.

Esther was a woman of great faith and worshipped and prayed to the Lord every day. She loved music and was the choir director at the Pentecostal Holiness and Trinity Assembly of God churches for well over 20 years. She played the piano and organ proficiently, and tickled the ivories every day well into her 90’s. She loved baseball and was always a steadfast Orioles fan. She was well known for coordinating her outfits to a “T”, going out to breakfast EVERY day and enjoying drives in the country or through beautiful neighborhoods. Returning home every afternoon to another love, journaling each detail of the day. She enjoyed traveling and was able to do so on her own for most of her life. Often, she loved being co-pilot in Jim’s Cessna up and down the eastern seaboard.

She will be lovingly remembered and deeply missed by her son Dan (Diane), her granddaughter Julia (Steven), her great-grandchildren Tyler, Matthew and Sophia, her great great-granddaughter Nova, and her niece Jeanne and family. She was predeceased by her husband, James and her son Jim, as well as her parents and siblings, Ruth, Elmer, Doris, Vernon and Darlene.

Service will be held at Taylor Funeral Home 5300 Park Blvd. Pinellas Park, Florida 33781 on January 4 from 1pm to 3pm. Another service will be held in Baltimore at a later date following entombment at Dulaney Valley Memorial Gardens in Timonium, Maryland.