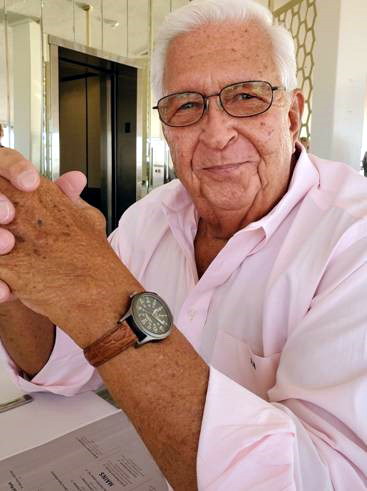 Richard (Dick) James Rigaux passed away on June 13, 2022 with his wife and children by his side.

Born in Akron, on December 15th, he was a longtime resident of Akron and Massillon, Ohio.

A proud veteran, Dick enlisted in the United States Marine Corps, serving in Vietnam. He spent his career as Director of Bakery/Deli Sales and Head of Institutional Sales for Fleming Foods in Massillon.

In his retirement years, Dick loved spending time with friends and family at his home in the Five Towns Community of St. Petersburg, FL. He served as Vice President, Council of Directors; Member, Buildings and Grounds Committee; President of the Men’s Club, and Board President of the Princeton Building. He organized and emceed many community events, earning him the affectionate nickname “Mayor of Five Towns.” He loved acting as tour guide to his visiting family and friends and taking them to his favorite restaurants and sights.

Dick most loved anything involving his grandkids. He especially enjoyed the beach, traveling, gardening, and working on his infamous tan. He could usually be found listening to music with his friends at the pool, planning the next social event, or landscaping behind his home.

He is remembered as a brave man, a loving husband, father, grandfather, and friend. He was also known for his quick wit, generous spirit, outgoing personality, and big heart. A hard worker with a love for life, he appreciated his world and encouraged others to do the same by often exclaiming, “Look at that sky!”

Dick will be laid to rest at Bay Pines National Cemetery, followed by a Celebration of Life in December. The family wishes to express their appreciation to the Moffitt Cancer Center and the ICU doctors, nurses, and staff at the Bay Pines VA Hospital for their compassionate care.

In lieu of flowers, please consider donating to the following causes:

Our thoughts and prayers are with you at this extremely sad time. Sending our hugs, Robyn.

Please accept my most heartfelt condolences for your loss of your darling Dick. What a true treasure he was to all who knew him! No matter what kind of physical challenges were placed in his path, he always fought so hard to overcome them. He was such a spirited warrior. And yes, you could tell how much he loved God’s amazing creation. He so enjoyed keeping it tidy and lovely!!
He is already so missed and I can’t even imagine the depth of your sadness. But I am sure that one day you will be able to cling to your happiest and most wonderful memories with so much joy.

May the Lord bless you and keep you all,
Patti Meesig

Robyn & Family,
We pray that our Lord comforts your hearts at this very sad time. Dick was a great person, I work at Fleming for nine years and he was my boss. I couldn’t ask for a better person to work for. Just know that we will meet him in heaven some day. It’s not Goodbye but Goodnight and we’ll see you in the morning.

Shelley and Ryan
So very sorry for your loss of your father💕🙏
Love and prayers being sent your way.
Jen and Matt Thomas
6/19/22

There are men in your life that you look up to, and Dick was for me! Thanks Dick for your service to our country, and most of all for your friendship. Thanks for leaving me with all the memories we made at Fleming. Prayers for Robyn, and family.

My condolences to all. May you find peace in your memories.

Ryan/Shelley,
I’m so sorry for your loss! Your dad was a fun, energetic man who was always making people laugh! I have a lot of great memories of him! He’ll always be in myheart and memories. Good bless you both during this time!
Love,
Matt and Jen❤️

I made a donation in his memory.