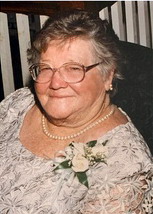 Mrs. Bennett was born on December 29, 1923, in Cairo, GA, to the late Johnson Gainous and Beulah Mae Faircloth Gainous.  She served her country in the United States Women Army Corp (WAC).  On May 5, 1956, she married Douglas Arnold Bennett, who preceded her in death on June 1, 1991.  They were married for over 35 years.  She was a homemaker.  Merle loved doing arts and crafts. She also always made sure to send cards commemorating loved one’s special occasions.