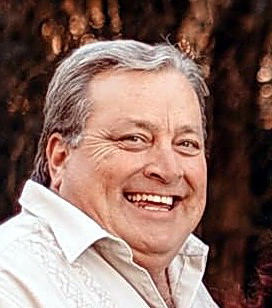 Bernard “Bernie” Bartlett entered into rest on Saturday August 27th, 2022 after a brief battle with cancer. One of four children, originally from Niagara Falls, New York, Bernie relocated to Florida in 1985, often saying he had now lived in Florida longer than he had lived in his “hometown.”

He spent his childhood with friends he was proud to have kept his entire life. Bernie was a high school track star who held the pole vault record at LaSalle High School until it was torn down, which allowed Bernie to remind everyone he was therefore the forever champion.

Through 36 years of marriage, Bernie was a very happily married man, and became father to two adoring daughters. He loved music and passed his appreciation of 70’s New Wave and Prog Rock to his children. Bernie’s love of music combined with his appreciation for trivia in his musical car trivia games where the stakes were always high, and the payouts never appeared. A diehard Buffalo Bills fan, Bernie loved sports of all kinds and even hosted a podcast where he shared his opinions on all sorts of sports matters.

Bernie was very involved in the VFW Auxiliary with Post 4364 where he was the Senior Vice President, dart league commissioner, and all-around always willing volunteer. He worked for National Cash Register for over 20 years as a retail service technician who made an impression at every store he entered. This is truly Bernie’s legacy: the unique ability to enter a room as a stranger and leave it as a beloved friend.

He was preceded in death by his parents Mary & Larry Bartlett and one sister, Connie Schrock. Bernie is survived by his beloved wife, Lori; his adoring daughters, Brianna and Lindsey; loving sisters, Vicki Schrock (Chris), Amy Scutt (Chris) & Tina Bartlett and many nieces and nephews, both original and great. Services will be held at Taylor Funeral Home.

I am sorry for everyone’s loss, Bernie got me to sub on Darts one night ( I didn’t Play Darts) but he told me to keep trying I will get better and better,he was always there to help,we will all sure miss that laugh he had,as he called me a hillbilly lol,rest in peace Bernie 💙

Lori, I’m so sorry for your loss, you and your family are in my prayers
❤

Lori and daughters I am so very sorry for your loss. Sending prayers ❤️.

I met Bernie around 1973 when we moved to Pasadena Avenue in Niagara Falls. He walked me to my first day of second grade and gave me confidence to go to my new school. In our five years there I got to know Bernie and all the siblings. We shared holidays, backyard sports events and had a blast. We returned to WNY and kept in contact and enjoyed garage concerts. My only regret is that we lost contact for a few decades. My loss. I’m sorry to know this gray soul doesn’t walk with us mortals anymore. My condolences and love to the whole family.

So sorry for your families loss.may Bernie rest in peace. He was a kind soul

For years at the Sacred Heart Festival Bernie made us smile and he made us laugh. It won’t be the same without him.

Lori, Brianna and Lindsey (“the Baby”❤), we are so so sorry for this loss. Bernie was such a Good man. It’s very hard to imagine a world without his Light in it. He will be forever missed and always thought of with a Smile. ❤❤❤
Love, Gene and Anita

I am so sorry to hear of Bernies passing. I met him when I worked at Walmart. I always enjoyed talking with him. He was a very interesting person and always upbeat. My condolences to his family.

Lori and family,
So sorry to hear about Bernie. He was a great neighbor growing up across the street on Pasadena. Wishing you peace. Laureen Hennegan Jacobs.

THIS IS TO BERNIE.
BERNIE WAS A CUSTOMER OF OURS AT FEDEX IN PINELLAS PARK.
HE WAS ONE OF MY FAVORITES. ALWAYS WHEN I SEEN BERNIE HE SHOWED ME FUNNY PICTURES OF HIM AND HIS
FAMILY. THE PICTURES WERE FUNNY CARTOON CHARACTERS.
BERNIE ALWAYS MADE MY DAY BY SHOWING ME THESE FUNNY PICTURES.. HE SO LOVED HIS FAMILY AND ALWAYS
BRAGGED ABOUT THEM. I KNOW HE IS LOOKING AT US SAYING SOMETHING FUNNY…
HE WILL FOREVER BE IN MY HEART.. AND THANK YOU BERNIE FOR ALL THE WONDERFUL MEMORIES YOU GAVE TO ALL OF US GIRLS AT FEDEX.. LOVE TO ALL HIS FAMILY… HILDA RADER